The Fluke That Led To The Foundation

As the Foundation gets set to mark its 50th anniversary, we look back on the passionate philanthropy, integrity, community-mindedness -- and the “fluke” that lead to its creation.

A half-century ago, leaders in the Ottawa Jewish community began the critical discussions and planning that would see the formation of the Ottawa Jewish Community Foundation. Recognizing the vagaries and uncertainty of the world, these leaders were dedicated to ensuring that the Jewish community would be protected, and its financial security ensured for all generations to come.

Originally known as the Ottawa Jewish Community Endowment and Bequest Foundation, the Foundation received its Letters Patent from the Province of Ontario establishing itself on November 19, 1971, as the very first Jewish community foundation incorporated in Canada. Its goal, which continues today, is to provide funding for, and ensure the viability of, the Ottawa Jewish community in perpetuity.

The prime movers behind the establishment of the Foundation were Gilbert Greenberg, a partner in the Minto Group real estate firm, who became the first president of the Foundation, and Bernard Shinder, the first Ottawa-based lawyer to specialize in tax law, who was the Foundation’s second president. Of the 13 men listed as founders of the Ottawa Jewish Community Endowment and Bequest Foundation, Mr. Shinder – who grew up in an Ottawa family committed to Labour Zionism – is the sole survivor a half-century later. 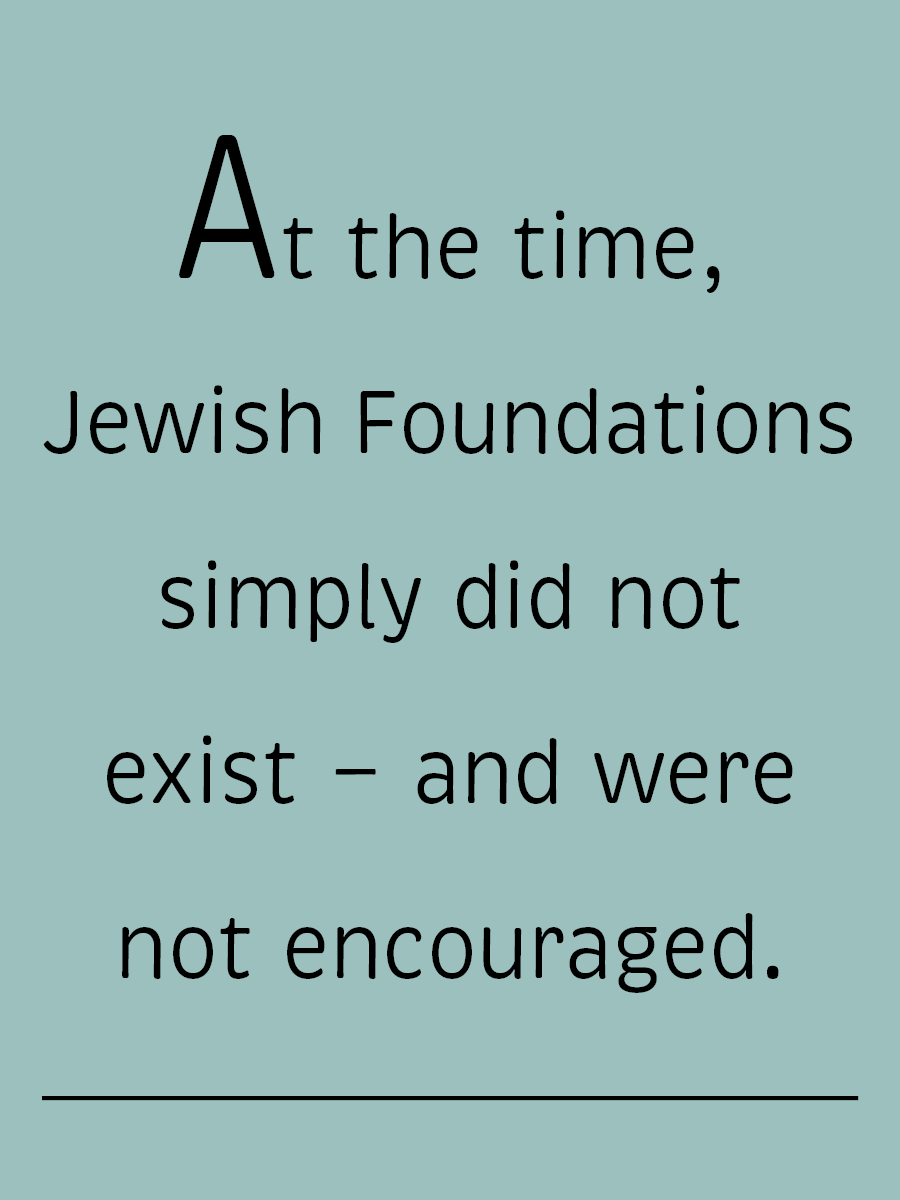 As Mr. Shinder recalls, “The idea [of establishing a Jewish community foundation in Ottawa] was Gilbert Greenberg’s. It was something that Jewish communities had tried to do for many years but the province [of Ontario] did not want a Jewish foundation.”

“Although,” as Mr. Shinder points out, “there were several Catholic foundations [at the time], there was certainly going to be no foundation for Jews.”

Resistance to the establishment of a Jewish community foundation in Ottawa did not solely come from government.

“There was also a great deal of resistance in the Jewish community to having a Jewish foundation,” recalls Mr. Shinder. “Many of the Jewish leaders [including some of the leaders who ultimately signed on as founders of the Ottawa Jewish Community Endowment and Bequest Foundation] didn’t want a foundation because they believed a foundation would impact badly on the annual UJA campaign [now known as the Jewish Federation of Ottawa Annual Campaign].” But, adds Mr. Shinder, Mr. Greenberg ultimately persuaded the community leaders who were resistant to the idea.

Indeed, several years ago the late founder Norman Zagerman told Lawrence Soloway that his father, the late founder Hyman Soloway, was among the Ottawa Jewish community leaders who were initially resistant to establishing a foundation.

“My father was not initially convinced that it was a good idea,” says Lawrence Soloway. “There were different schools of thought. Some thought that if you got the people with resources to make substantial gifts to the foundation, they would wipe their hands, say ‘I’m done with it,’ and not donate to the annual campaign… That was the kind of tension going on in the discussions around creating the foundation… My father was skeptical about the desirability of the foundation. Fortunately, he didn’t win that argument.”

Mr. Soloway was among the community leaders who were ultimately persuaded of the need for a foundation by Mr. Greenberg. It seems fitting that Lawrence Soloway will step into the role of Foundation chair in 2021, a year of celebrating the 50th.

Roger Greenberg, who chaired the Foundation 2007-2009, says his father wanted the Foundation to provide for the future needs of Ottawa’s Jewish community and that his dream, early on, was “was that the Foundation would grow enough in size in capital that the income from it would be able to fund the Jewish education for every young Jewish child in the city of Ottawa without cost.”

“His call to the community was to encourage people to give money when they had a significant event in their lives that provide a lot of cash – to put some of that away to help build for the future.”

According to Mr. Shinder, it was “a fluke of people who knew people” that led to the province of Ontario ultimately approving the establishment of the Ottawa Jewish Community Endowment and Bequest Foundation.

When the former public trustee of Ontario retired, he was replaced by someone Mr. Shinder knew and he called him.

“I called him, and he said, ‘I know why you’re calling. You want to know about the Jewish foundation. You know what our formal position is’,” recalls Mr. Shinder.

Mr. Shinder and the public trustee met for a couple of hours and determined that the proposed foundation would not be “a Jewish foundation, per se,” but rather a foundation “created for the benefit of the Ottawa Jewish community.”

As Mr. Shinder explains, the Ottawa Jewish community – as represented by the Jewish Community Council of Ottawa/Vaad Ha’Ir (now known as the Jewish Federation of Ottawa) – “was a non-profit corporation and its directors were Jews,” and that the foundation would be “an offshoot – effectively a subsidiary of that corporation – for the benefit of the corporation.”

“We sketched it out and it looked sort of awkward,” recalls Mr. Shinder, “but it certainly fulfilled the needs of what it was we had to do.”

Mr. Shinder then went to see Toronto tax lawyer Wolfe Goodman, then one of the top tax lawyers in Canada.

“We sat for a couple of hours. We fiddled with it. We wrote a draft charter and, between he and I, we worked it out,” recalls Mr. Shinder.

“I came back to Ottawa with a foundation,” remembers Mr. Shinder.

The Founders’ Family – A Legacy of Leadership and Philanthropy

Family members of those 13 Jewish community leaders who ultimately founded the Foundation remember their fathers, grandfathers, husbands and uncles as being part of a visionary generation of leaders committed to building the community and its religious, educational and communal institutions.

Roger Greenberg recalls that his father, Gilbert Greenberg, stressed “the importance of giving back to the community… My mother and my father instilled in us the importance of not only contributing financially what you could, but contributing of your time – and that would be equally important in going forward to set an example for others and to help the community in a variety of ways.”

Gilbert Greenberg was the first president of the Ottawa Jewish Community Council and was also highly engaged in community governance, rising to the presidency of the Jewish Community Council of Ottawa/Vaad Ha’Ir (now the Jewish Federation of Ottawa). The highest award offered by the Jewish community of Ottawa – the Gilbert Greenberg Distinguished Service Award – is named in his honour. Roger Greenberg and his family continue to follow his father’s example with dedication and generosity. Roger chaired the Foundation 2007-2009 and brother Robert chaired Federation’s Annual Campaign for two years.

Lawrence Soloway recalls that his father, Hyman Soloway, who was born in Ukraine in 1913 and came to Canada with his parents and older brother at age 10, “was a very substantial member of the Ottawa Jewish community – without question one of the leaders of his generation. He was president of the Vaad Ha’Ir, president of his shul, Beth Shalom, a person of great stature and many leadership roles in the Jewish community.”

“Leadership was in him,” says Lawrence Soloway. “He was a person who garnered a lot of respect in all the circles that he inhabited: the legal community, the business community, the Jewish community – so people listened to his views. I think leadership was just part of his DNA.”

Mr. Soloway and his peers, says Lawrence Soloway, “were the first generation of the educated cohort [in the Jewish community] so they would naturally be expected to assume leadership roles.”

Similarly, Lawrence Soloway has taken on numerous leadership roles in the Jewish community, including sitting on the current Foundation Board of Directors as Vice Chair,
and Chair of the Investment Committee.

Mr. Hochberg’s niece, Linda Kerzner, recalls her uncle as “a very distinguished individual. He was always calm, in control, presented himself in a very professional manner and yet he had a very endearing sense of humour… He was always working with community members to make things happen… He was a master of negotiation. He was a master of bringing very divergent points of view together and I think that was one of his incredible strengths… There wasn’t anything that went on [in the Ottawa Jewish community] that he wasn’t directly involved in.”

Linda Kerzner says that Hy Hochberg “set the tone for one of the most unique, cooperative Jewish communities in North America,” which is his enduring legacy.

Once the Foundation was up and running with its first gift of $100,000 from Michael Freedman, the Foundation founder most involved in making it a success was Ottawa movie theatre owner Casey Swedlove, who acted as the Foundation’s volunteer executive director for 25 years until a staff person was eventually hired.

As a child, Michael Shapiro remembers his grandfather’s “prominent role” in the affairs of the Foundation, “managing it, making sure that things were going well.”

Mr. Swedlove was also one of the founders of Agudath Israel Congregation (now part of Kehillat Beth Israel) and served as the shul’s president for several years.

Michael Shapiro also stressed the importance of Mr. Swedlove’s wife, Bess, herself a prominent community volunteer. “My wife Nikki and I try to model ourselves as a couple after my grandparents, Casey and Bess,” he says. Indeed, the Shapiro family is heavily involved in community work and Nikki sits on the Board of Directors for Federation and chairs several key committees including the Partnership2gether program and the Shinshinim initiative.

Carole Zagerman, who married the late Norman Zagerman in 1985 when he was a widower, was not there at the time of the founding of the Foundation in 1971 or when he was president of the Jewish Community Council of Ottawa/Vaad Ha’Ir from 1973 to 1975, but she describes Mr. Zagerman as “very dedicated to the community” and “to good causes. He was called the Godfather of the Jewish community.”

“He loved the community and wanted things to go well,” she says. “Even late in life he cared very much about what was happening.”

Certainly, the legacy of these extraordinary individuals has been carried on by their descendants and still flourishes today in the vibrancy of the Foundation and the Ottawa Jewish community. 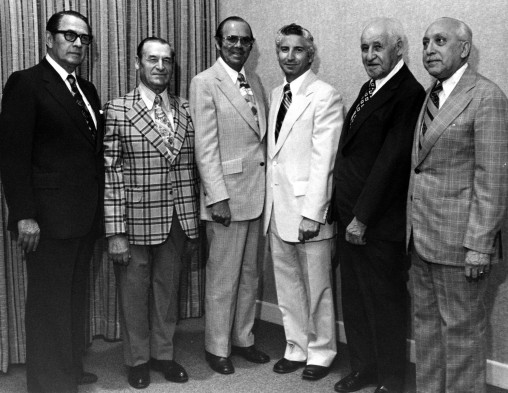 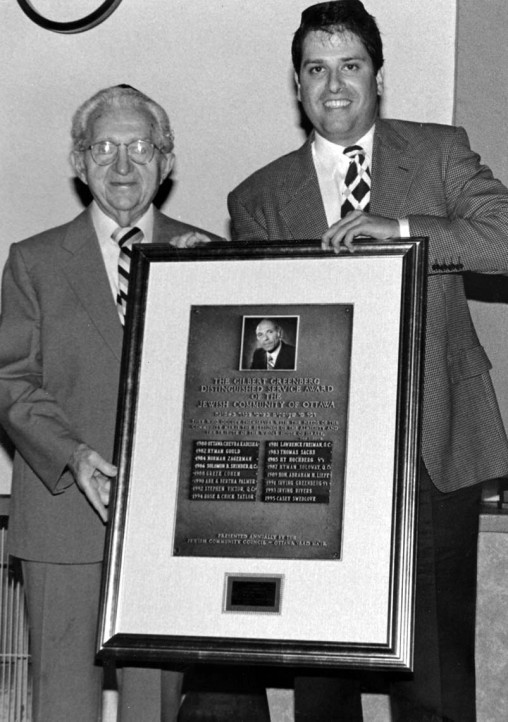 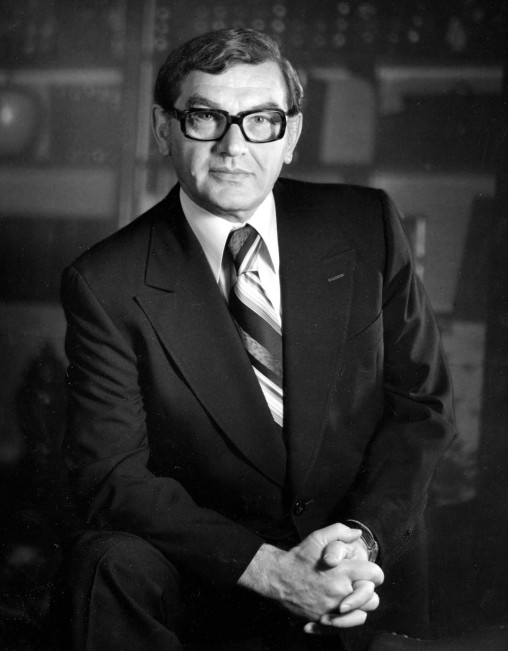